Ecuador by bus? Here’s all you need to know

Ecuador by bus? You will love this experciente! Wanderbus travels the breadth of Ecuador with its flexible guided experiences. If you are interested in a private transfer to Otavalo, get in touch today!

Getting around Ecuador by bus is affordable and pretty straightforward if you’re travelling between the main cities. Ecuador is one of the smallest countries in South America, and yet it still has great natural and cultural diversity. What this means for you is that you can visit all four corners of the country without shelling out on expensive flights (or spending 30 hours on a bus)!

1. What’s a good starting point for bus travel in Ecuador?

Quito is a great starting point as there are buses to every area of the country from here. There are direct buses to most major areas, but if there isn’t a direct bus you can easily change at the nearest city. We recommend getting night buses for the longer stretches, as they are less likely to stop en route and there is less traffic so they are much faster.

Here are some average times on direct buses from Quito: 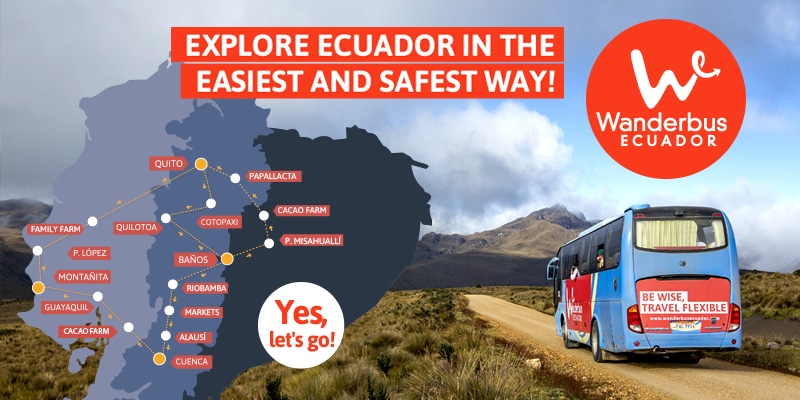 2. Is it better to fly to get around Ecuador?

You can fly to all major cities and large towns, but because the country isn’t huge the time you save by flying isn’t necessarily worth the money.
Mainland Ecuador cities and towns connected by scheduled flights (some more regular than others):

AIRPORTS IN THE ANDES with scheduled passenger flights

AIRPORTS IN THE AMAZON

AIRPORTS ON THE COAST

Note that not all of these cities/towns are inter-connected. For example, you can only fly to the Amazon towns from Quito.

Internal flights can vary in cost. One-way flights can be found for around $80, but at peak times they can cost up to $300 return. So not a good backpacking alternative! Guayaquil and Cuenca’s airports are very central.

The airlines operating domestic flights in Ecuador are: TAME, LATAM and Avianca.

How to get from Quito airport to the city

Quito’s airport is located in Tababela, about 30 km to the east of the city. To get to the city itself, you need to take a public bus to the Rio Coca, Carcelén or Quitumbe bus terminals ($2), take a shuttle bus to the Bicentenario Park ($8), hail an Uber (about $15-17), or grab a cab from the official taxi rank (about $25).
Credit: Dan Nevill

Buses in Ecuador have time tables but not all companies stick to them. Those going from major terminals like Quitumbe in the south of Quito tend to be on time, as there are more controls and logistics involved. Once you get to other terminals outside of Quito some buses wait until they are full enough, or go early if they are already full. We have found that there is virtually no reliable information on time tables or routes unless you physically go to the terminal (or miraculously find the bus company’s phone number), which is an absolute bummer in the case of Quitumbe because it takes about an hour to get there from the Centro Histórico or La Mariscal/La Floresta. If you have mild OCD and want to book things in advance, it’s pretty impossible to do so.

Pickpockets usually operate above deck. If you’re travelling with luggage in the hold, just make sure it’s well closed and you shouldn’t have any problems. We tend to put our valuables in a backpack that we carry with us at all times just in case. On the bus, don’t put your bags in the rack above your head, or on the floor, but instead keep it on your lap. Thieves have been known to sneak under the seats and empty out the goods while you sleep. Having said this, crime is not rampant in Ecuador – just be cautious.

The main cause of the accidents is driver error and the poor maintenance, and age, of the vehicles involved.

You can take buses at night to make the most of the day time for exploring destinations. However, it’s worth noting that the majority of accidents on public buses happen at night.

If you decide to take night buses to cram as much as possible in, take a pillow and a blanket. The pillow will allow you to use your neck in subsequent days, and the blanket can be incredibly helpful for those journeys where the driver decides he would rather be in the North Pole and puts the air conditioning on full blast. We also wear a money belt so we can snore away without being stressed about our valuables.

5. Is there an alternative to public buses in Ecuador?

If you are looking for an alternative to public buses, you should check out Wanderbus. We have straightforward routes that run through the whole of Ecuador in a hop-on, hop-off style, and they’re far safer than normal buses. Plus, we have excellent accident and medical insurance for all our passengers. Once aboard, you can meet loads of other backpackers and there’s a guide on hand to help you with anything you need.

Book with us today!