Would you like to know more about Ecuador food culture? In Ecuador, as in the rest of the world, life revolves around food. Extended families gather on a biweekly basis for a shared meal, friends get together to try new restaurants and, across the country, colleagues synchronize lunch breaks to visit a nearby hole-in-the-wall restaurant for a $3 lunch.

Ecuador is a geographically diverse country, and that same diversity is exhibited in its cuisine. Ecuadorian food culture changes drastically as you travel from the Coast to the Andes to the Amazon because the culture itself also varies.

The Andes is responsible for the country’s agricultural production. Fresh produce and grains abound and are apparent in the region’s traditional cuisine. Given that this is also a colder climate, the food tends to be wholesome, involving many warm stews and lots of potatoes.

On the Coast, the food is characterized by the use of fresh seafood and plantains, both of which are abundant in the region. All along this region you can try dishes like sopa de cangrejo (crab soup), encebollado (fish soup), ceviche (lime-cooked seafood dish), and encocados (coconut-based seafood dish). These are all dishes that require fresh crab, fish, shrimp and squid – directly from the morning fish market. These are usually eaten with a side of white rice and smashed fried plantains, called patacones in Spanish.

In the Amazon, agricultural production is much harder due to the climate and pests. Though nowadays everything can get sent over from the Andes, food culture in this area is still characterized by the use of the region’s natural resources. Freshwater river fish, and now farmed fish like tilapia, are used in maitos, while starch comes in the form of yucca, papa china and plantains – all of which are easily cultivated here and resistant against pests.

Due to the amount of fresh produce and grains, Ecuador is a great country for vegetarians. However, food culture across regions usually still revolves around meat of some kind. If you’re vegetarian, keep in mind that most restaurants are willing to make adjustments to a dish’s ingredients, but the price will either remain the same or increase. In more tourist-friendly places, like Baños, you’ll find more variety for vegetarians. 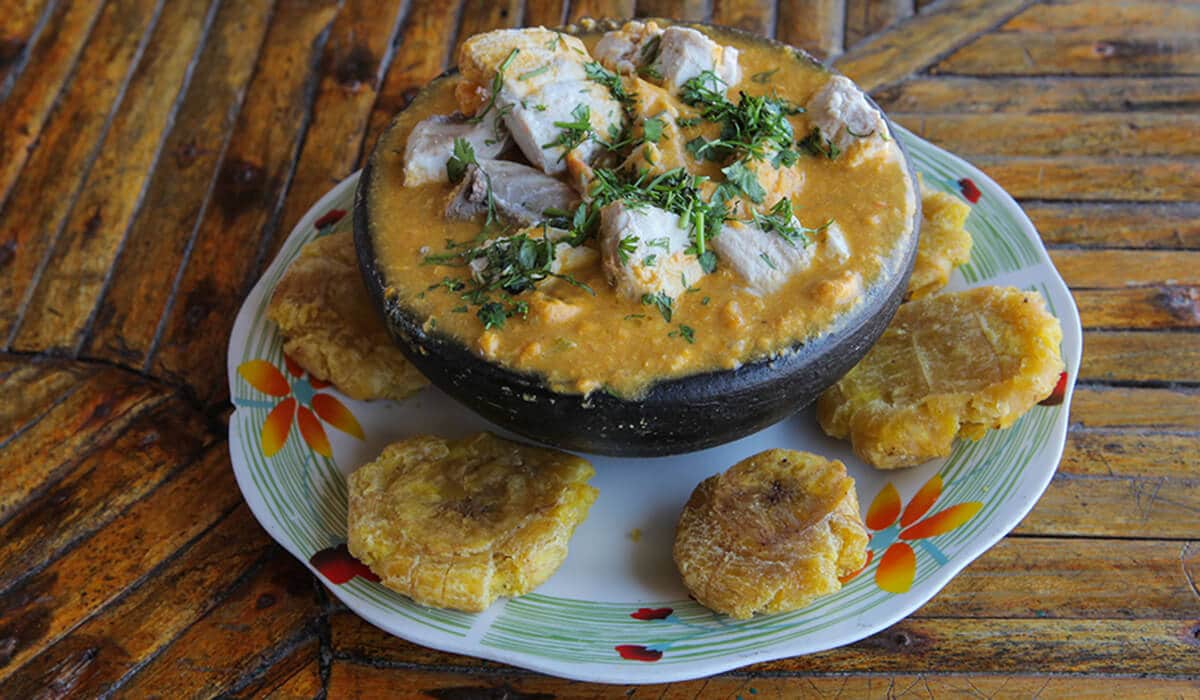 What do Ecuadorians eat for breakfast, lunch, and dinner?

Depending on where you are, you’ll have different breakfast options to choose from. That said, almost across the board, you’ll find a conventional breakfast almost everywhere!

In the Andes, the typical breakfast usually includes a glass of fresh fruit juice, a small bowl of fruit, warm bread rolls, a couple of fried eggs and coffee (unfortunately this may be instant coffee instead of drip, or pasado).

For breakfast on the Coast, you’ll more likely eat a bolón with fried eggs, fresh juice and coffee. A bolón is made from boiled plantain that is usually mixed with cheese, and sometimes pork, formed into a ball and fried in a pan. It essentially replaces bread and is very filling.

Encebollado is also a common breakfast on the Coast, but often too savory for many foreigners. It’s a fish-based stew mixed with yucca, tomatoes, onions, peppers, and lemons. It’s usually eaten with plantain chips or popcorn and is quite revitalizing, especially after a night of partying!

Traditionally, in the Amazon, indigenous communities consume a large cups of chicha. Chicha is made from cooked yucca and undergoes fermentation, making it mildly alcoholic (you have to drink several cups to feel any buzz). It’s usually prepared by women and served in the morning, before everyone heads out to harvest food and/or hunt. It provides a lot of energy and keeps people going into the late afternoon, when they return from their duties to eat dinner.

Obviously, if you’re traveling through the Amazon region, you’ll find breakfast options you’re more familiar with. If you get the chance to visit an indigenous community though, you’ll likely be offered chicha. This is an important symbolic gesture on behalf of the community – drink some of the chicha so that you don’t offend your hosts!

Lunch and dinner are usually quite similar across Ecuador and revolve around a source of protein, be it meat, pork, or fish. Carbs will come in the form of white rice, potatoes, or plantains (verde), and a small salad normally accompanies the meal. 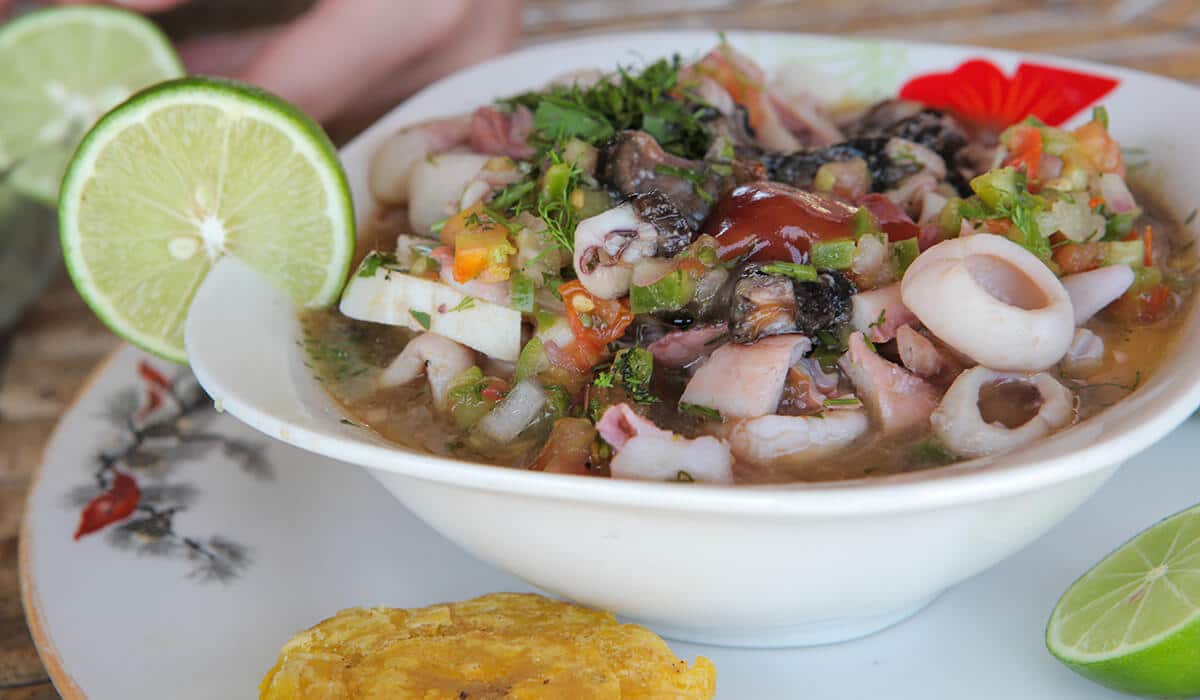 As you get to know Ecuador food culture, you’ll likely be offered some of the following dishes. These are considered typical Ecuadorian meals and, unless you have strict dietary restrictions, try them out! 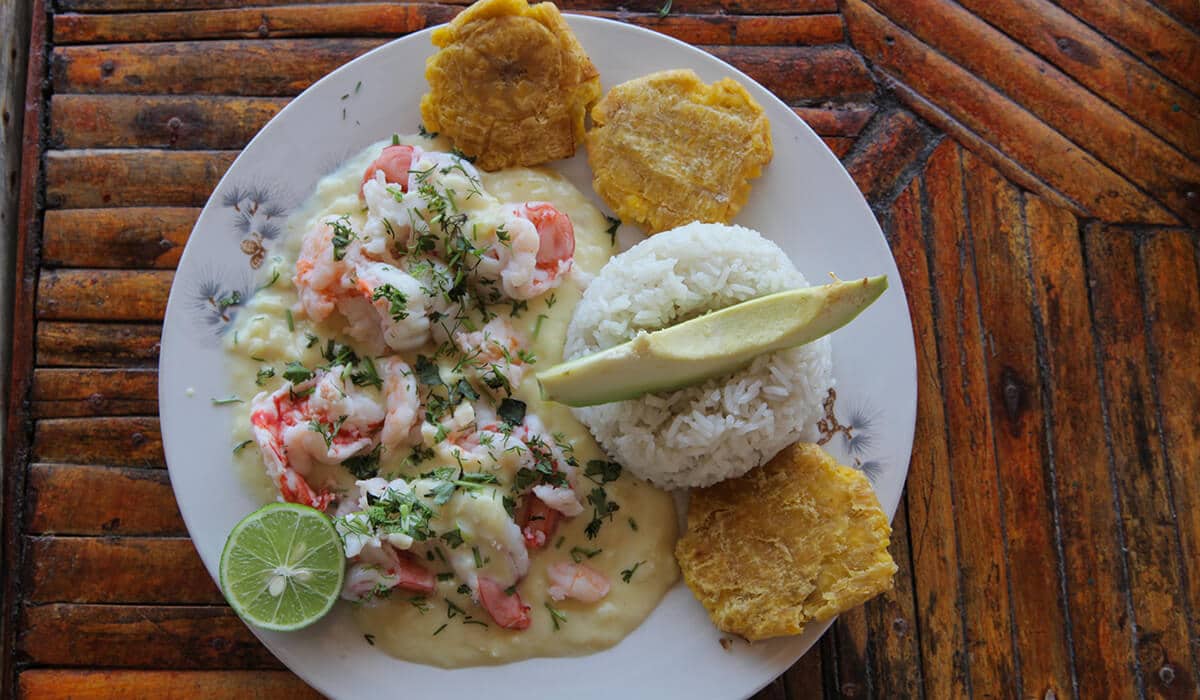 We know how important food is to a traveler’s experience and, along our routes, we’ll stop through many towns for lunch with highly recommended food stalls or restaurants. If you’re on a shorter route, make sure to ask one of our bilingual guides, who would be traveling with you, as you approach the town.

Additionally, traveling with the Wanderbus provides flexibility and security that is hard to find with other modes of transport in Ecuador. Our pick up and drop off locations don’t leave you stranded in a dodgy neighborhood without any guidance. Instead, you’ll likely walk a couple blocks from your hostel.

If you fall in love with a place (or the food there!), you can always stay a few more days and hop on the next Wanderbus that comes through. It’s all designed for your enjoyment because, really, that’s the point of travel!

Read More »
PrevPreviousVilcabamba, the Valley of Longevity
NextSwing at the End of the WorldNext