There’s a distinct vibe to Ecuador’s largest city. It might be the hubbub of the port, the tropical heat, the history of pirates and fires, the tempting seafood, the iguanas lounging in the park or the mangos growing on the trees. Here, people are loud and unreserved, the rum and beer flow and the city buzzes with life well into the night.

The river is the city’s lifeline and central attraction; wandering along the Malecón, or riverfront, is the best way to soak up local life, ending up at the colourful Las Peñas neighbourhood that spirals up towards a blue and white-striped lighthouse. Though often thought of by travellers as a stopover pre- or post-Galapagos or the highway to the beach, there’s wildlife and wild times in this vibrant city that make it a destination in its own right. 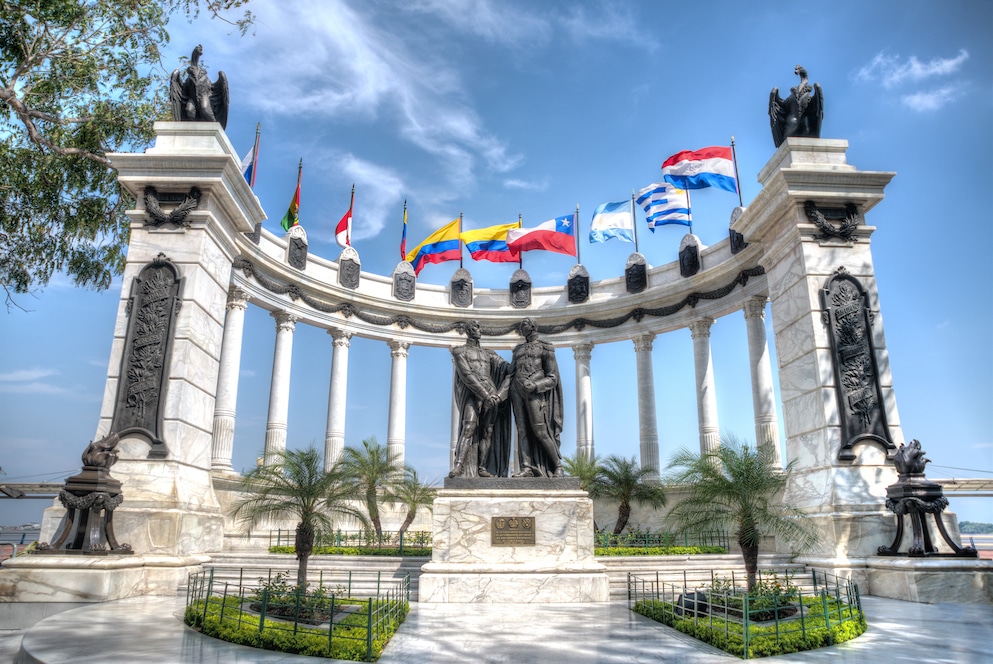 How to get to Guayaquil

A popular destination in Ecuador, you’ll find several modes of transport that will get you to Guayaquil.

Public transportation: To get from Quito to Guayaquil by public transportation, you’ll need to first go to the Quitumbe (“Terminal terrestre Quitumbe”) bus terminal. If you’re staying in Quito’s historic center or Mariscal district, Quitumbe is a $10-20 taxi ride (depending on the time of day) or a $0.25 trip on the Trole. However, try to avoid taking the Trole in the evening and nighttime and always keep an eye on your possessions when you’re using public transport in and around Quito.

Once in Quitumbe, you’ll find a number of bus companies that depart to Guayaquil. The direct trip from Quito to Guayaquil takes about 9 hours and costs around $11-$12. Since it may be a long ride, select a bus company that appears to have comfortable seats!

Wanderbus Ecuador: For a trip as long as the Quito to Guayaquil route, an excellent alternative to public transportation is the Wanderbus.

A number of our Wanderbus passes take you to and from Quito and can connect you to the rest of the country, stopping at a few must-see destinations like Cotopaxi, Quilotoa, Baños, Cuenca, Guayaquil, Montañita, and so much more. If your travel plans aren’t set in stone, you should seriously consider this option. This way, the long, complicated journey will be broken up into more manageable chunks, giving you the chance to see the best of the Ecuadorian Andes, coast, and jungle and completely skip the inconvenience, discomfort, and boredom of traveling on regular buses. 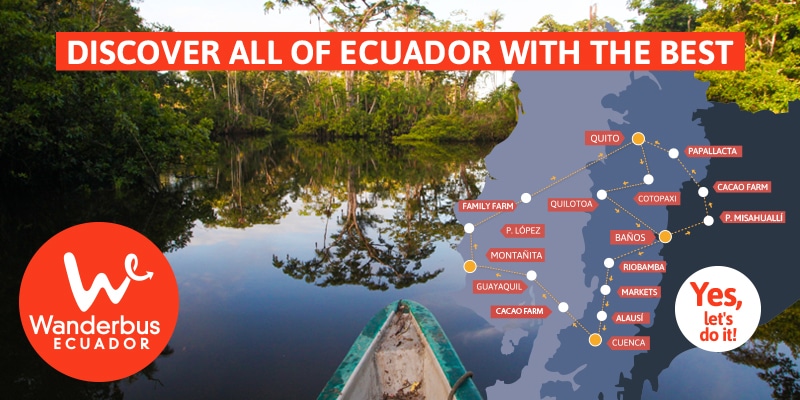 Legend has it that this city was named after the pre-colonial rulers, Guayas and his wife, Quill. However, historians believe the name originates from the words ‘hua,’ meaning land, ‘illa’ meaning beautiful prairie, and ‘Quilcas,’ the name of the tribe that originally inhabited this area.

The Spanish first settled this area in 1534. Guayaquil was important as a ship-building city but often suffered from frequent pirate attacks and devastating fires. Guayaquil eventually became independent from colonial control in 1820 and soon after joined the republic of Ecuador in 1830.

Before traveling to Ecuador, it is strongly recommended that you purchase travel insurance in case of any emergency, including health and loss of possessions. Guayaquil is fun if you take the right precautions; try not to use your phone outside unless it’s absolutely necessary, watch your possessions, and try to use taxis through your hotel or hostel.

Since Guayaquil is such a large city, there is no shortage of good hospitals and clinics that you can visit for anything you need. Here are just a few:

Pharmacies can be found all over Guayaquil. The bigger chains include Fybeca, Sana Sana, and Cruz Azul. This link will indicate the pharmacies registered on Google Maps in Guayaquil.

You can take cash out of the ATMs located in Quito, all with large trusted banks in Ecuador, these are JEP, Banco Bolivariano, Banco Pichincha, Banco del Pacifico, and Banco Guayaquil, you can find the locations of each ATM here with Google Maps.

Always try to plan ahead so that you don’t need to visit the ATM very often, increasing chances of being targeted by thieves, and always avoid taking cash out in the evening.

Wifi can be accessed in almost any restaurant or cafe you come across, so you don’t have to worry about staying in touch.

Things to do in Guayaquil 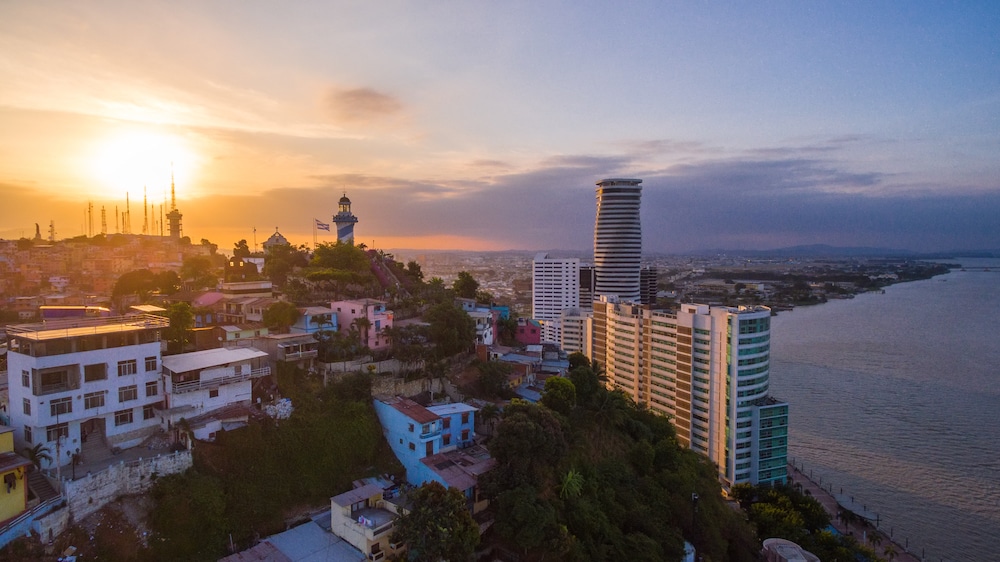 Whatever you interests are, there are so many fun things to do in Guayaquil, the secret is just knowing where to look! Below are a few good starting points to help you out!

Getting around Guayaquil is really easy if you know what to do! The best option is to ask your hotel to call you a safe taxi or you can call an Uber or Cabify on your own.

Planning your time in Guayaquil

Planning your time in Guayaquil depends entirely on what YOU like to do, but we’ve listed some of the highlights. We encourage you to take these and customize your itinerary based on the amount of time you have, personal preferences and your budget.

File could not be opened. Check the file's permissions to make sure it's readable by your server.

Where to stay in Guayaquil

As the largest city in Ecuador, Guayaquil has lots of options, which includes AirBnb. This can be a perfect option for those looking for a more homey feel in this city.

Hotel and Hostels in Guayaquil

There are many amazing hotels and hotels in Guayaquil, you won’t have any trouble finding something you like! Here we have a list of a few places to help you out:

Where to eat in Guayaquil

It’s all about the seafood and plantains here, with fresh ceviche and hearty encebollado (a delicious fish soup) for breakfast – every local has their favorite, top secret encebollado joint, ask around for the best one of the moment (though El Pez Volador is always a winner). Beer is served ice cold and late into the night. Though decent, the best restaurants are not located around the Malecón, or waterfront, where most travellers end up staying; instead look to more residential barrios like Urdesa or Samborondón.

When to Visit Guayaquil

If you’re visiting Guayaquil, get ready for the heat! Since it’s on the equator, there’s little change in the weather throughout the year. You can expect highs between 29-31 C (84-90 F) and lows between 21-24 C (70-75 F) with some humidity as well as sun shine for 12 hours a day every day.

Beyond Guayaquil — Sites to Visit Nearby

Day Trip to the Beach

Playas is the closest beach to Guayaquil, at about an hour away, and a great location for a day trip. There’s also tons of other beach options near Guayaquil, like Salinas, which you can find here in Guayaquil beaches: All you need to know.

Kayak or canoe through this ecological reserve to see birds, other animals, and of course the mangrove forests that are protected in this beautiful place.

This forest is a private reserve made to protect the unique natural environment of the coastal region. Tourists have access to trails within the forest where they’ll see tons of animals, including monkeys, jaguars, birds, and other creatures, some of which are endangered.

Your packing list may vary depending on the activities you decide to do and on the weather.
Apart from your regular packing items, you should include the following to your packing list:

Optional: GoPro or other waterproof camera to capture your adventures!

Head north up the coast on the Wanderbus to the town of Montañita for the beach and some partying or to Puerto Lopez for a more relaxing laid-back beach vibe, and then to Quito to experience Ecuadorian culture in the capital city!

Plan your Trip to Quito with Wanderbus – you won’t regret it!

Check out our passes here.