Things to do around Cuenca

There are so many awesome things to do around Cuenca. Simply wandering the cobbled streets in the historic city center can be a fantastic adventure while touring around the city. Without a doubt, visitors will do exactly that while exploring the varied recommendations lay out in this post which presents visitors with some new and exciting things to do around this amazing city. 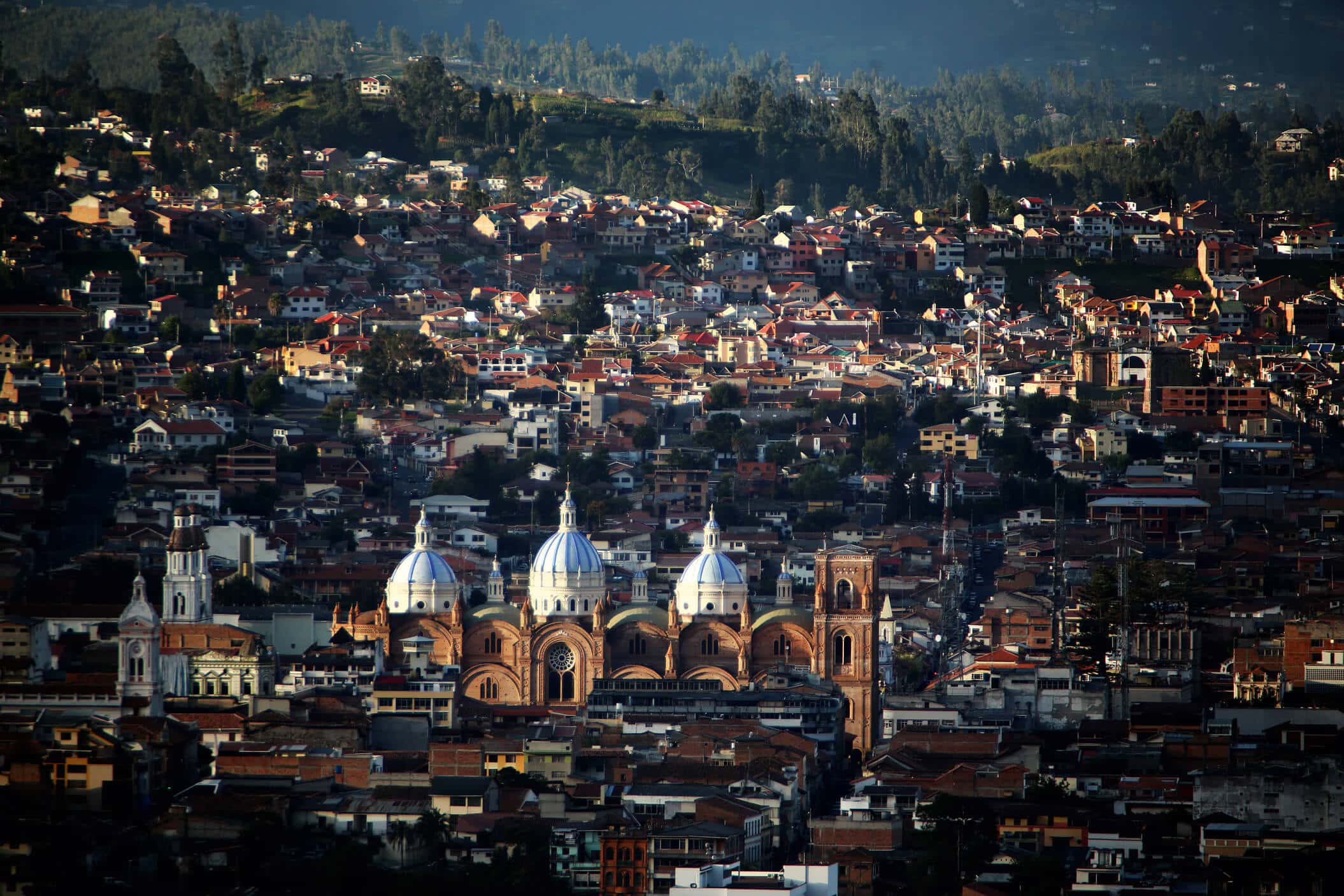 No trip to Cuenca is complete without a visit to the Mirador de Turi; this is the city´s most famous lookout point on the edge of the Hitocruz Hill, high above the city, with stunning views underneath. Cuenca’s beautiful churches, red rooftops, and straight avenues can be admired from this high point located on the southern border of the city.

There are many ways to get to this lookout point, most people prefer to access by taxi but there are a few adventurers that dare to walk up the nearly 500 steps that lead to this amazing place. From the city center to the Mirador there are 5 kilometers.

Adjacent to the lookout point is also the Ictocruz or Huaca Quilla, a small park with varied short hiking trails for those visitors who would like to enjoy a quick walk while admiring the city´s stunning views. Also, for the more intrepid ones, there is an alternative hiking route that leads to the top of the hill where Cañari and Inca´s archeological vestiges can be seeing, as well as small remains of the Inca Trail or Qhapac Ñan that used to cross through this area; according to Inca history this hill was a worshiping place to gods and deities of this culture.

If you are interested in hiking to the top of the hill make sure you do it during the day. It is not recommendable to walk pass the antennas since this area is considered a little bit dangerous.

This archeological Inca vestige lies intermingled in the heart of the city. Studies indicate that before the Spaniards ´arrival, in this place raised the Inca city of Tomebamba. It was considered the second capital of the Tahuantinsuyo, after Cusco, which were connected through the Inca Trail or Qhapaq Ñan. Pumapungo was at the heart of Tomebamba and was considered the most important administrative center of that time.

This archeological complex posses many building´s foundation walls which include a palace, a prominent leader´s residence, cemeteries, walkways, and stepped terraces used for sowing and cropping; this last ones are the most prominent features in the site.

You can walk down the side of this former fortress which leads to a modern garden showcasing crops of the ancient civilization. That’s also where you can get the best glimpse of this ruin site. The complex offers a free museum where you can get a more detailed explanation about the history of this important ancestral place. Plan to spend a few hours between the two attractions.

Cuenca’s New Cathedral and visit to its towers

Cuenca’s signature aerial image always depicts beautiful blue domes highlighting the city center; these spectacular domes belong to the New Cathedral also known as Cathedral de La Inmaculada. A visit inside this grand Catholic Church is a must-do while visiting the city since it is among some of the largest and most beautiful churches in Latin America. There is plenty of marble and stained glass to admire, as well as the gold leaf-covered altar. But wait, there is more! 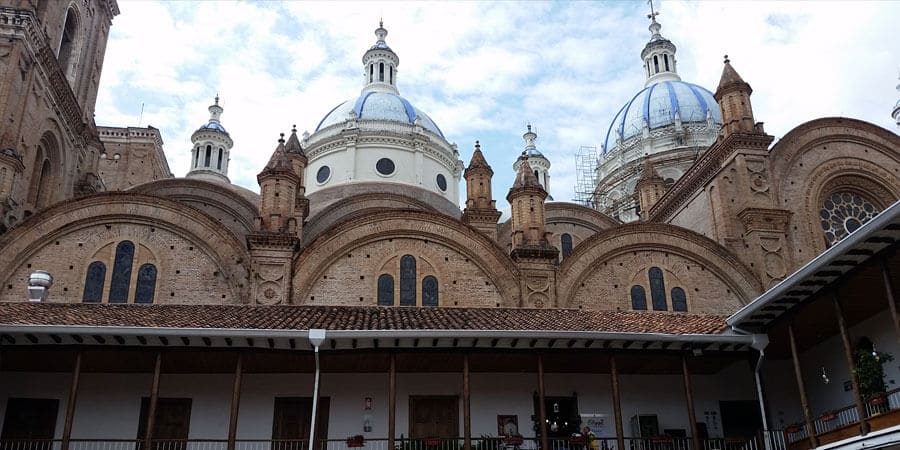 Many guests are not aware that it is possible to climb up the towers of the Cathedral and visit the underground thumbs and chapel.

There are many steps to reach the top, where all the effort is rewarded with superb views of the city’s historic center. You will also get a close look at the Cathedral’s iconic blue domes.

The Cabogana Hill and a deeply connection with nature

The sublime Cabogana Hill is located north of Cuenca and it dominates this entire area’s landscape. I’s hiking route connects deeply with nature through an ascent among cloud forests and moorlands; it is a challenge for the mind and body with rewarding panoramic views that dominate the city and valleys around.

In order to embark on this wonderful adventure you must reach the little town of Sayausí; bus line 3 will take you directly to this destination. Once in the main square of the town, ask locals for the landmark where the path and the journey begins. The trail ascends through a forest with striking tree ferns while crossing a few ravines until reaching an open area full of rock formations. The forest immediately comes to an end and gives way to the grasslands and the moor; finally reaching the entrance of the Cabogana lagoon. This lagoon is the highest point of the route and offers a great peace and tranquility where each visitor experiences a strong connection with nature.
For the descent you can use the same ascent path until you reach the milestone again.

At the top of the hill some archeological Inca remains have been identified, although these required further studies since they have not yet been cataloged; maybe these vestiges have inspired the Mama Huaca legend where rumors of a hidden treasure exists.

Everybody knows that the Ecuadorian Andes are full of volcanoes, but not many people know about the fact that Cuenca is sitting over an old volcanic zone which boasts natural warm spring waters that are rich in minerals from the thermal activity occurring underground. On the outer edge of the city is a community with countless spas, known as Baños. Do not get confused with the more well-known city of Baños De Agua Santa, right next to Ambato, which is hours away. This Baños of Cuenca is a simple 10-minute drive from the city center.

Piedra de Agua is the most prominent spa in Baños de Cuenca. They offer 3-hour “spa circuit” which includes eight treatments ranging from Turkish baths to steam baths to subterranean contrast pools. Perhaps most interesting is the volcanic mud exfoliation treatment, involving the red and blue mud baths; the red mud cleans and exfoliates the skin, while the blue mud then acts hydrate and moisturize.
The spa offers a varied menu of cocktails and delicious food to enjoy while complementing the relaxing moment.

A trip to the Piedra de Agua spa can feel out of this world for anyone who has been doing lots of trekking and hiking in the surrounding outdoors. It can definitely be the perfect way to clean up and relax after achieving Ecuador´s Inca Trail or Qhapaq Ñan.

We hope this list of things to do around Cuenca provides some solid ideas on what to do in the city and help you take the most advantage of your trip.

As a final remark, let us tell you that in the last few years the city has become a popular foodie destination for all types of budgets and palates. There is a variety of restaurants lay out every other corner around the city; among the most popular ones are Mercado, La Placita, Tiestos, Rose, and many more distinguished, well established places worth dining!

Tour, eat, and relax in the city that has it all… Cuenca the Athens of Ecuador!

Read More »
PrevPreviousDay Tours from Cuenca
NextCommunity-based Tourism in Ecuador: Getting the Most Out of Your TripNext