We take the hassle out of travel by taking care of the practical things, so you can sit back and enjoy your travels. We have five different passes that include the Devil’s Nose Train in the itinerary, transport there, away and the train ticket too.

The Devil’s Nose Train uses a segment of the Trans-Andean railroad which runs from Alausi to Sibambe. As noted by Lonely Planet, the Devil’s Nose Train is one of the finest and most daring feats of engineering that the world had seen”. They were not wrong in this description, and you can feel it in the ride.

The Trans-Andean railroad runs from Quito to Guayaquil.  Taking the train for the whole route can be incredibly expensive. But, taking this segment is affordable and by far the most exciting part.
The train line construction began in 1872, and was finished in 1905. It connected parts of the northern coast to the Andean region of Ibarra, Quito and continued south to Cuenca. Now, some of these parts are no longer functioning, but the main route from Quito to Guayaquil was refurbished in 2007.

You used to be able to ride on the train’s roof around the Devil’s Nose. But this was closed after two tourists were decapitated by a low hanging electricity wire several years ago. Nowadays you can only travel inside of the train, but if you sit on the side of the views it’s still pretty hairy.
Here you will everything you need to know about this amazing adventure!

How to get to the  Devil’s Nose Train

If you want window seats on the side of the train with the views, you might want to book in advance on www.trenecuador.com or through a travel agency in Riobamba or Cuenca. You’ll need to travel to Alausi with enough time to catch the train. If you’re staying in Cuenca it will take about 3.5 hours by bus to get to Alausi. Meanwhile if you’re in Riobamba about an hour and 45 minutes. If you want to take the early morning train you can travel to Alausi the day before and stay overnight. Unlike other transportation in Ecuador, this train leaves right on time, so make sure you arrive early enough.

There are only two departures a day

Make sure you plan ahead! There are only two departures of the Devil’s Nose Train a day from Tuesday to Sunday. The first leaves at 8:00 and the second at 11:00. The trip takes about 2.5 hours in total.

The train is one of the most complex feats of engineering, as it descends 1,000 meters in just 12 km. In order to accomplish this, the train follows a zigzag path carved into the rock, slowly moving forwards and backwards until it reaches the bottom. American engineers were brought to the country to solve the puzzle of how to cross this segment of the Andes.

Many people died building it

This section of the railroad was built by 4,000 Jamaicans and other workers. It is estimated that 2,000 of them died while building this Devil’s Nose Train segment of the railroad from the dangers of the landscape, illnesses, and plagues.

The Ecuadorian Andes are such an amazing area to explore. We recommend you check out our article about the Cotopaxi Volcano and Baños, a gorgeous town in the skirts of Tungurahua Volcano. 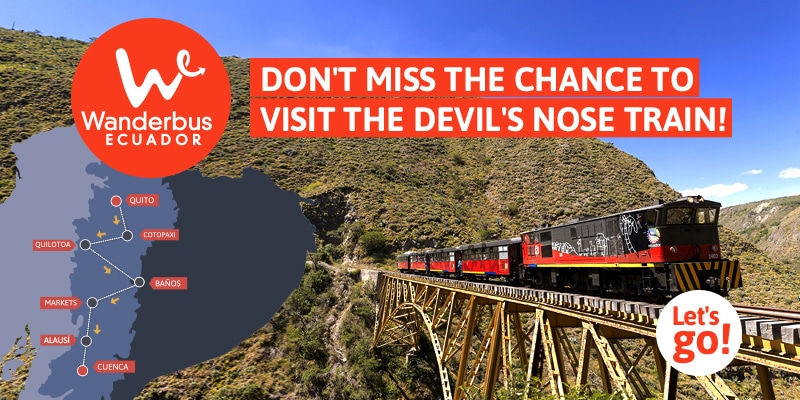 Book one of our passes today!