Puerto López: How to get there and things to do

Are you looking for things to do in Ecuador? What about checking out Puerto López Ecuador beach? There are a few destinations along the Ecuadorian coastline that you won’t want to miss during your trip, and one of these is Puerto López. In the following blog we’ll give you tips on how to get from Quito to Puerto López, and what activities are worthwhile in Puerto López and the surrounding area. 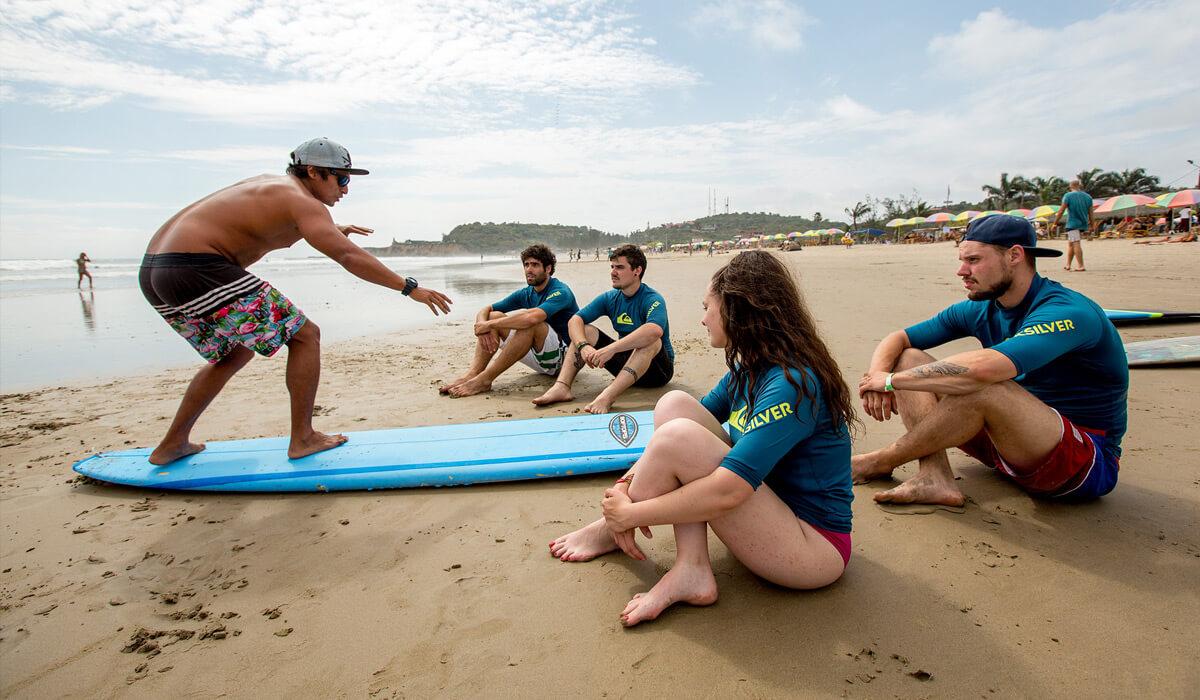 The main reason tourists travel to Puerto López is to whale watch. This particular area in Ecuador is considered one of the best whale watching destinations of the world. It provides both a mating and nursery area for humpback whales that travel 7,000 km journey up from Antartica.

In addition to whale watching, Puerto López offers visitors a glimpse into everyday Ecuadorian coastal life, and is a convenient jumping off point to a number of nearby destinations.

There are a few ways you can get from Quito to Puerto López.

If you’re planning on getting from Quito to Puerto López by public transport, you’ll need to head to the bus terminal in the south called Quitumbe. To get to Quitumbe, you can either take a taxi or the trolley line headed south.

Buses to the coast often leave in the evening and drive through the night, which means you’ll have to get to Quitumbe at night, which can be dangerous. If you take a taxi, take a safe taxi using Cabify or Uber, and the entire trip might cost you between $10-20 dollars. Alternatively, you can take the trolley, just be very mindful of your belongings.

The best part about traveling on public transport is always the price: $9 to get to Puerto López, that’s roughly a dollar an hour!

Many tourists often wonder how they get their tickets before their trip. Sometimes you can get the latest departure times from your hostal. Calling bus companies usually doesn’t work, however. If you know roughly at what time your bus is set to depart, make sure you give yourself enough time to get to Quitumbe (roughly an hour, depending on traffic), and maybe even an extra hour to play it safe.

The Wanderbus leaves regularly from Quito and other cities at pre-selected, convenient pick-up points, and is a much safer option for travel to the coast and around the country.
Please contact Wanderbus today to inquire about schedules and routes to get to Puerto Lopez.

A more expensive, but convenient, option is to fly to Manta or Guayaquil from Quito and then either get a private car or take a bus the rest of the way to Puerto López. Check out websites like LATAM or Despegar.com for deals on flights. 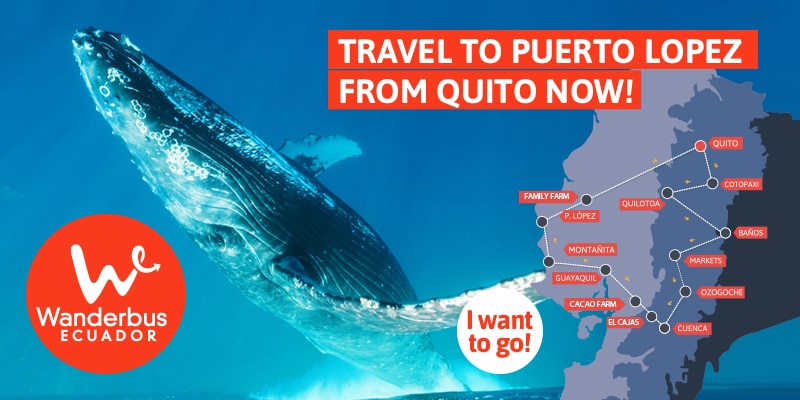 Things to do in Puerto López

Check out all the amazing things you will be able to do in Puerto López!

Once you’ve arrived in Puerto López, have a walk around the town and stop at one of the various tour shops that offer whale watching tours or get ratings and reviews on this Tripadvisor page. Many tour companies offer other activities like snorkeling and diving as part of the package.

Hauling in the catch – Morning fish market in Puerto López

One exciting activity that takes place every day in Puerto López and doesn’t cost a cent is to rise early and watch the fishermen come in with their catch. The south part of the beach essentially turns into an outdoor fish market and it’s all quite the spectacle. Sharks, rays and other marine life (the legality of some of this is questionable) are hauled in, cleaned and sold fresh, often loaded into trucks and taken to cities in the interior of the country. Meanwhile, pelicans, frigates, boobies and cormorants hover nearby to snatch the stray fish or entrails.

It’s very likely that any seafood you’ll eat that day will be fresh from the boat! 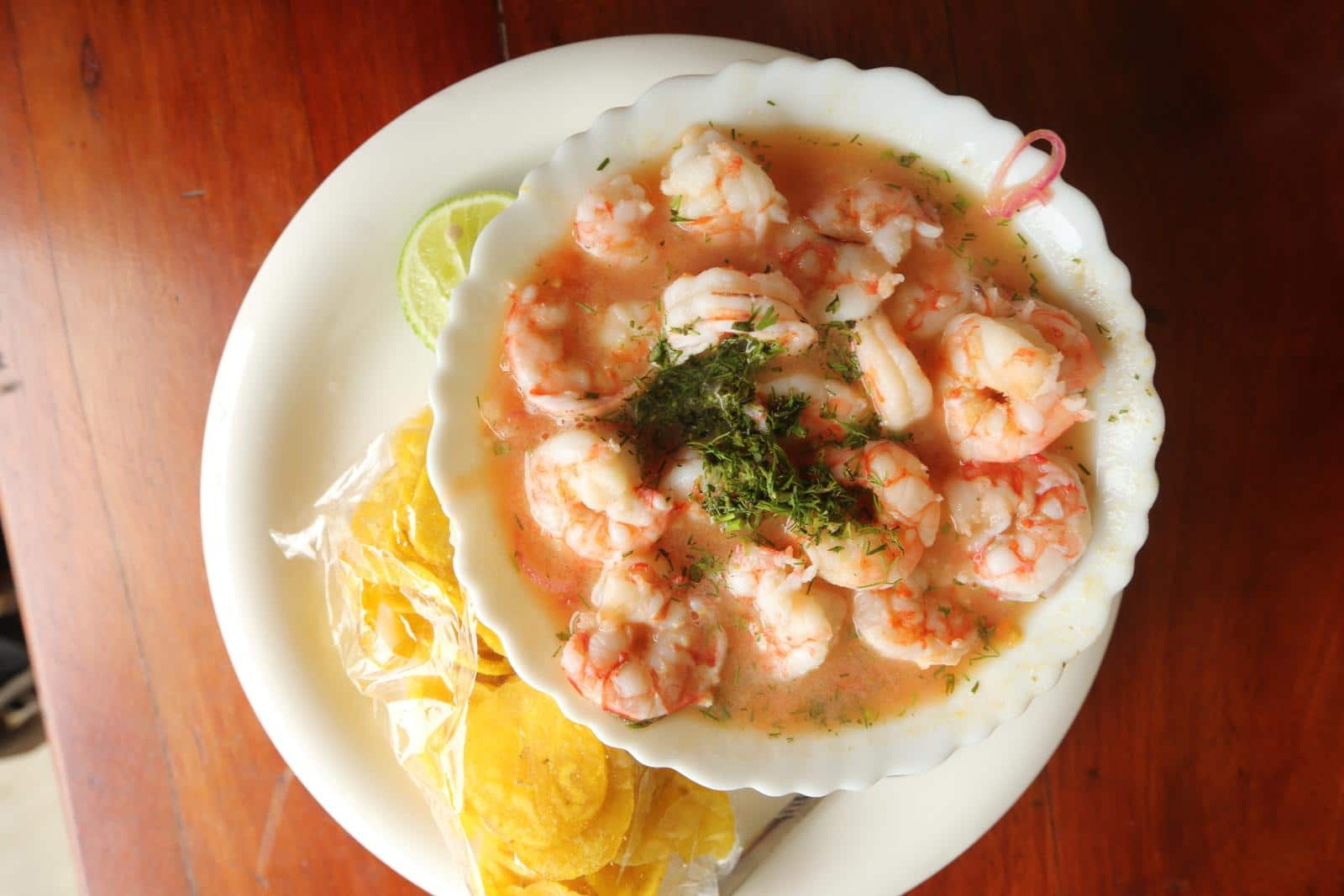 While the town of Puerto López may not look like much, it is a strategic place to stay if you want to visit the surrounding area and also experience real Ecuadorian coastal life. During the day, you’ll likely be on various whale watching or snorkeling tours, but at night there are a few places in town to have fun, although keep in mind that nightlife here will not compare to nightlife in Montañita.

Along the boardwalk, or “malecón”, you’ll find a number of pop up beach bars where you can order a fresh Piña Coladas or smoothie. If you’re looking to dance, there are a couple of bars, including one called Wett which offers salsa classes.

Things to do around Puerto López

There are also several interesting things to do around Puerto López, don’t miss them!

Covering an area of 750 km2 (290 mi2), Machalilla National Park is Ecuador’s largest protected area along the coast and a gem for locals and tourists alike. Within it, you’ll find a number of inspiring spots to explore.

Anyone visiting this area of Ecuador must spend a day in Los Frailes. This immaculate, white sand beach is actually a short string of beaches that are representative of what the entire coastal area once looked like, before human intervention.

To get to Los Frailes, you can either take a bus, taxi or moto taxi from Puerto López to the entrance of the park. The entrance is free of charge but you’ll be asked to show official ID for registration purposes. Between the entrance and the beach itself you can either walk (30 mins) or continue on with a taxi or mototaxi. Keep in mind, you won’t be allowed on the beach if you’re bringing any glass bottles or alcohol. Snacks are permitted, but make sure you don’t litter on the beach and keep all the trash on you until you leave.

There’s nothing wrong with traveling on a budget! Not everyone will be able to afford a week-long stay on the Galápagos Islands and, for that reason, the Isla de la Plata (Silver Island, in English) is a highly recommended alternative.

As noted in Lonely Planet, this name came about due to a legend that Sir Francis Drake – an English explorer – who is said to have buried a chestful of silver there in the sixteenth century. Silver that has never been discovered.

Located within Machalilla National Park, Isla de la Plata offers visitors a diversity of marine species, including many that you might see while visiting the Galápagos Islands. These include: various species of boobies, including the blue-footed boobie; sea lions; and hundreds of fish species that can be spotted while snorkeling or diving.

Tours to visit the Isla de la Plata can be found in Puerto López. Many of these include snorkeling and a guided hike along the island’s trails.

Also located within Machalilla National Park is Agua Blanca, a local community project that gives visitors the opportunity to learn about the area’s history and bathe in a sulfuric lagoon known for its medicinal properties.

In Agua Blanca, after paying a $5 entrance fee per person, you’ll get a 40 minute guided tour of the museum and archaeological site. The tour is in Spanish but is still worth your while. At the end of the tour, you’ll reach a lagoon that has natural sulfur. For the full spa treatment, you can choose to apply mud to your body, let it dry, and then rinse it off in the lagoon. You’ll find that your skin is unbelievably soft afterwards!

San Sebastián is a beautiful area located southeast of Agua Blanca where tourists can hike and spot local wildlife, like the black howler monkey and the guanta (lowland paca, a small rodent). The entire hike is around 20 km (12.4 miles) long and can be done by mule, if you’re not sure you’ll make it on foot!

To enter this area, you’ll need to hire a local guide, which you can find in Puerto López or Agua Blanca.

The trail through San Sebastián rises to 600 km and gets quite humid. Bring plenty of mosquito repellent, long trousers and long-sleeved shirts. You’ll have a chance to cool off during the hike in a small waterfall too!

Another island located within the perimeter of Machalilla National Park is Isla Salango. While not as popular as Isla de la Plata, Isla Salango is another wonderful spot to snorkel, scuba dive and enjoy a clean, white sand beach.

Meanwhile, on the mainland, the town of Salango has a rich history and is considered a ceremonial center for six pre-columbian cultures over the last 5,000 years, including the Valdivia, Machalilla, Chorrera-Engoroy, Bahía, Guangala, and Manteña cultures. The Salango archaeological museum gives visitors a chance to see one-of-a-kind ceremonial artefacts belonging to these cultures.

Around 25 minutes south of Puerto López lies Ayampe, a sleepy surfer town that has become increasingly popular over the last five years. While still a relaxed and quiet place to enjoy the beach, Ayampe offers tourists a number of comfortable and affordable hostals and restaurants to eat and dine at and is especially pleasant if you and your partner are looking for a romantic getaway during your trip to Ecuador.

While in Ayampe, you can do a number of outdoor activities, including surf lessons, hiking trails, horseback riding, paragliding and more. Keep in mind, there are no ATMs in town so withdraw enough cash while in Puerto López.

To get to Ayampe, grab a public bus, shared or private taxi, or even hitchhike from Puerto López.

The temperature in Puerto López doesn’t vary too much and the area is significantly drier than the northern coast of Ecuador. It fluctuates around 23 – 28 C(74 – 82 F) with the hottest months of the year between February and April when temperatures rise to 30 C (86 F).

Best places to eat in and around Puerto López

One of the best places to eat in the area is at Restaurante de Jimmy, a small surf restaurant located north of Ayampe and before the town of Puerto Rico. You’ll find a number of local dishes made of fresh seafood often with a delicious peanut sauce, popular in this region of Ecuador. Shrimp, fish or octopus ceviche is also especially good here!

In Salango, the Delfin Mágico is a restaurant made popular for its delicious seafood. If you haven’t yet tried scallops in a garlic sauce (“al ajillo”), now’s your chance!

The distance from Quito to Puerto López is 490 km (304 mi), which is roughly an 8 hour drive. From Guayaquil, it’s 195 km (121 mi), roughly a 3 and a half hour drive. For your reference, we’ve included a map below that indicates some of the locations listed in this blog.

Are you ready to start exploring Ecuador’s Manabí coastline? Before you book any tickets, check out our Wanderbus passes for a safer and more flexible way to travel.

Read More »
PrevPreviousWander Destinations: Quito
Next6 Awesome Activities to do in MontañitaNext